The backbone of any great city is safe, secure neighborhoods and we need first responders to accomplish that.

Status Quo – When it comes to the Phoenix police and public safety, our officers are understaffed and under-supported. Our city has seen a ten-year-high for homicides and average response times continue to rise over the past half-decade, while City Hall still cannot manage to find the resources to hire more first responders. We have fewer first responders today than we did 10 years ago but the city has grown rapidly throughout the same 10-year span. 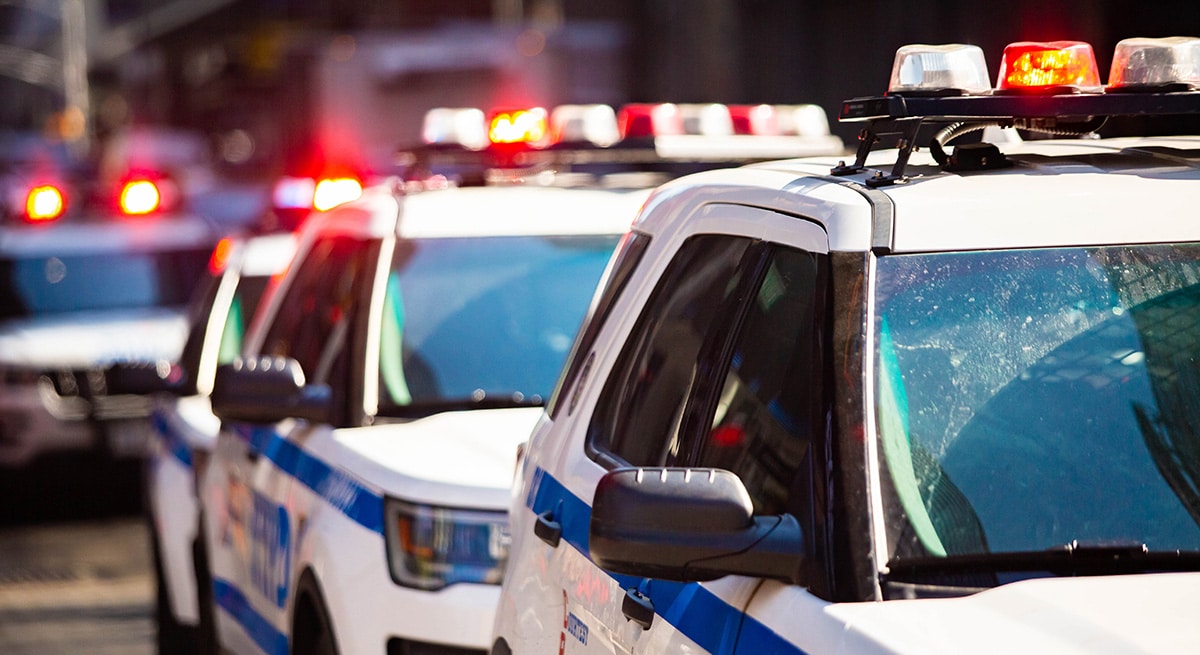 PHOENIX POLICE AND FIRE UNDER PRESSURE 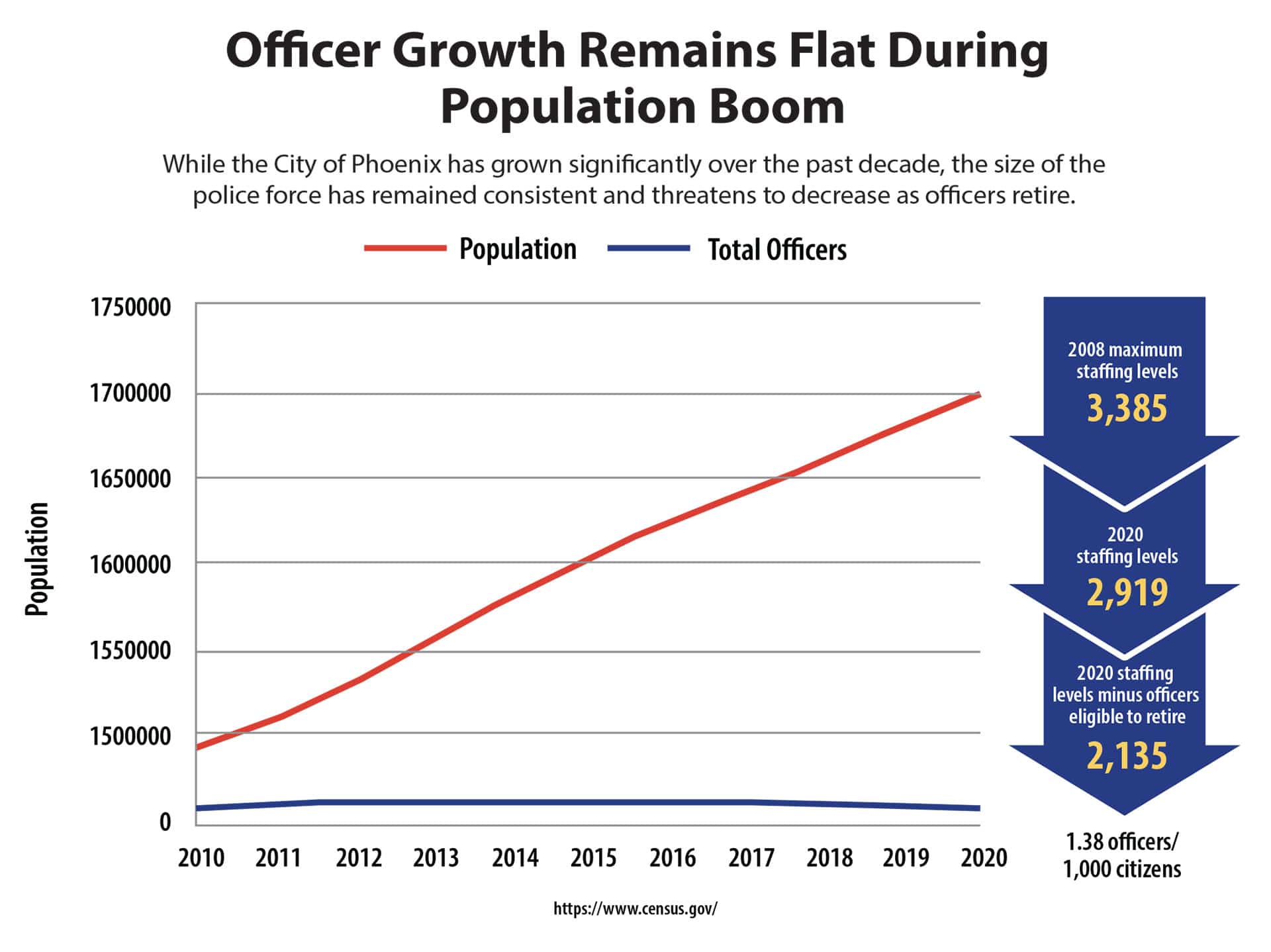 Our police officers are understaffed on the streets and under-supported at City Hall. Hiring more officers isn’t about resources; it’s about prioritizing public safety. As Councilmember, I will put public safety first and set a goal of returning to our pre-recession (2008) levels of police officers.

Make sure our Phoenix police & firefighters are properly manned, trained, and equipped.

Phoenix families deserve better than the status quo when it comes to public safety and as Councilmember, I will make sure our FIRST focus every day is supporting first responders and making sure they have the resources to protect our communities.

When Phoenix Police Officers step out of their vehicle, every community member should know, respect and trust that officer. That starts with community-based policing that emphasizes officers working in communities and partnering with community leaders to create a safe and secure environment.

We should promote effective programs like the Arizona Angel Initiative that help police officers do their job and reduce the effect of substance abuse and our nation’s opioid crisis. Additionally, the City must be more proactive in partnering with organizations like the Maricopa Integrated Health System and mental health groups to provide more behavioral health resources to those in need.

Phoenix police officers should be focused on the work they do on the streets, not caught up doing paperwork at the precinct. We should invest in a system that increases booking efficiency and allows officers to get back to doing what they do best.

Phoenix Police has LESS officers than other Comparable Cities 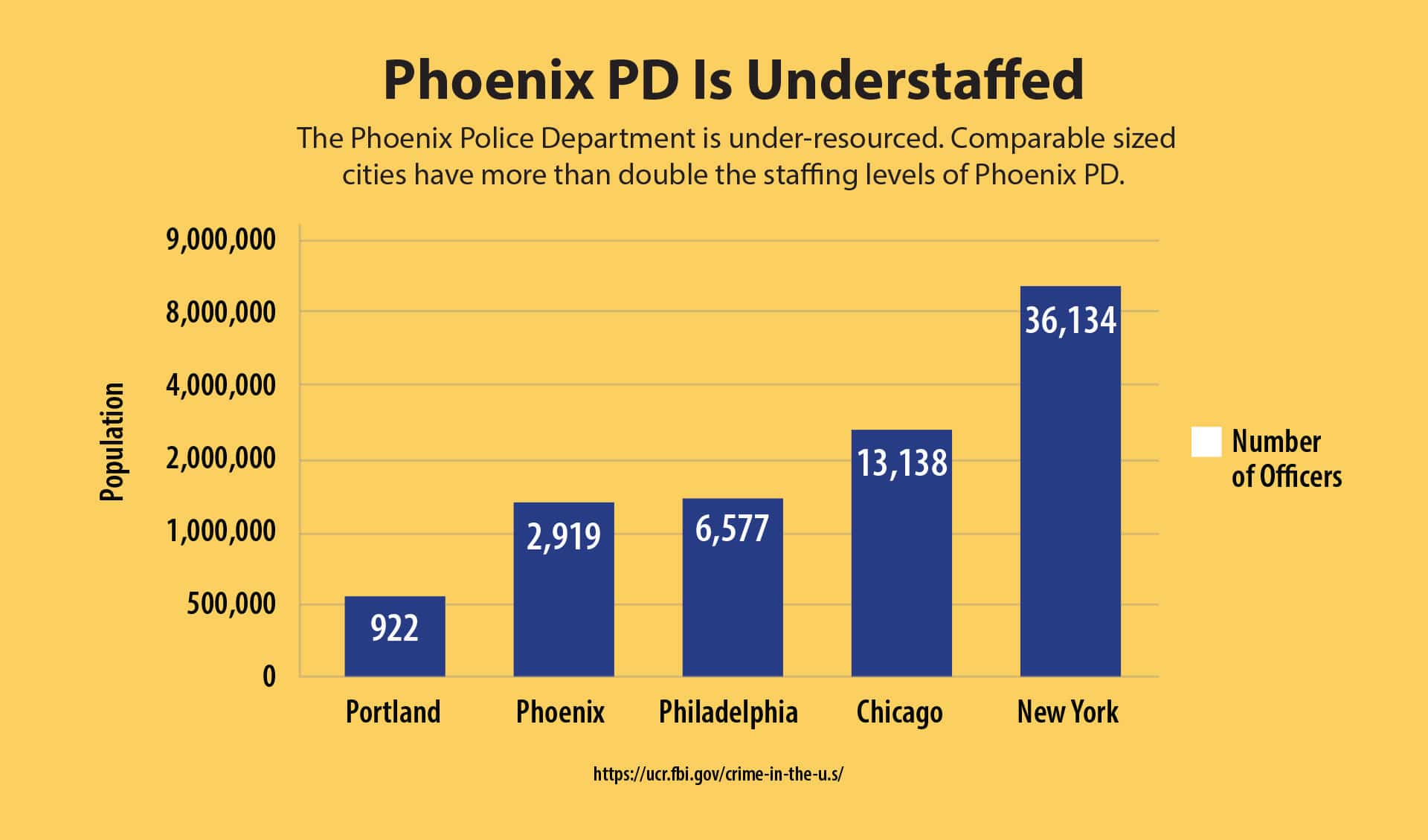 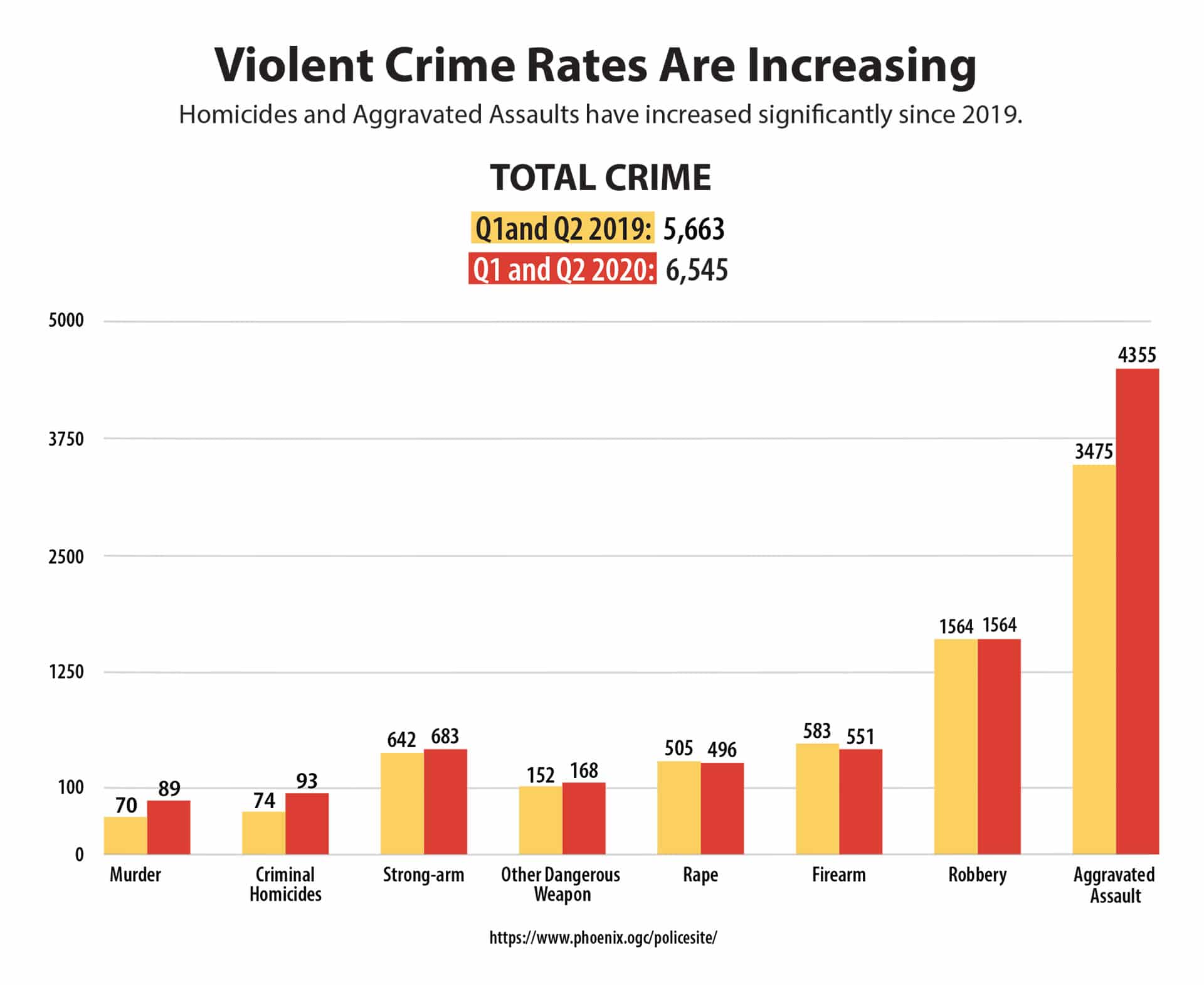 Phoenix Police has been dealing with an increase in violent crime all exacerbated by the pandemic which has caused gang and domestic violence-related homicides to increase in the past year.

Below is a summary from a GREAT Opinion Piece by a retired Police Chief from what was once the most dangerous city in America.

Isaiah McKinnon is a retired chief of the Detroit Police Department, retired associate professor of education at University of Detroit Mercy and former deputy mayor of Detroit.

Here’s what we must do to get started:

I was a police chief stopped by my own officer. After Floyd, we need change at all levels.

George Floyd could have been me.

That was my first thought when I saw the video of Minneapolis police officer Derek Chauvin choking the life out of George Floyd.

In 1957, I was a freshman at Cass Technical High School. As I walked home after speaking with my favorite teacher, four white police officers jumped out of their cruiser, threw me against it and beat me severely. I hadn’t done anything wrong. Officers in the feared “Big Four” were well-known in the black community for brutally maintaining their kind of “Law and Order.” The more I screamed, the more they beat me. Time seemed to stand still as I saw the anger on their faces and the horror on the faces of black people who gathered around us, yelling for the police to stop.

After what felt like hours, they told me to get my ass out of there. I ran home crying but did not tell my parents, fearful that it would put them in danger. I was 14, the same age as Emmett Till when he was killed in Mississippi two years earlier. I was scared, angry and confused. Why did they hurt me?

After graduating and serving four years in the Air Force, including a deployment to Vietnam, I joined the Detroit Police Department on Aug. 2, 1965.

As a rookie officer, I encountered overt and casual bigotry and routine denigration and brutality. Many white officers refused to ride alongside black officers. Some made cardboard dividers in patrol cars — designating the “white” section from the “colored.” Others used Lysol to “disinfect” seats where black officers sat. Some of my white colleagues refused to speak with me during shifts, dared not eat near or with me, and frequently used the N-word to describe me and the African American citizens they were sworn to protect.

A white colleague tried to kill me

Two years later, I felt the sting of betrayal as an officer during the 1967 rebellion. One night, after a grueling shift, two white DPD officers pulled me over. I was still in uniform, badge affixed to my chest and a #2 pin on my collar, indicating that I worked in the 2nd Precinct. I identified myself as a fellow officer, thinking they would see me as an equal. Instead, one pointed his gun at me and said, “Tonight you’re going to die, n—–,” before discharging his weapon. I dove back into my vehicle and miraculously managed to escape. I realized then that not even our shared uniform could save me from their racism. And I wondered that if they were willing to shoot and kill a black police officer, what were they willing to do to black civilians?

As a supervisor a few years later, I stopped a group of officers from beating three black teens. I was finally in a position to hold them accountable for their excessive use of force. But my precinct commander yelled at me for attempting to “ruin the lives of those good officers.” I witnessed this kind of complicity repeatedly. When other officers reported abuse, as they should, they were ostracized, transferred to lesser assignments and treated so poorly that many quit.

Enforcing the law while black: I understand the anger but don’t defund police. It could make things worse.

During these years, my mental salvation was education. I earned three degrees, including a master’s degree and Ph.D. When I became chief of police of Detroit in 1994, it was important for me to root out the bad officers — like those who beat me as a teenager and tried to kill me in 1967. I also worked to rebuild trust with the community, which for too long felt like it was at the mercy of a violent and indifferent police force. It was my mission as chief to make a difference in the lives of Detroiters.

It was incredibly difficult, however, to eradicate implicit biases and systemic racism in the department. When I was chief, a white DPD officer pulled me over one night. He approached my unmarked vehicle and without looking at me, asked for my license and registration. Wanting to see how far this would go, I said, “Yes officer.” At some point, he recognized who he had stopped and immediately apologized. My question to him was, “Why did you stop me?” He said, “I thought it was a stolen car.” The officer was reprimanded for his actions.

Later, as deputy mayor, I attended a Criminal Justice Forum in Washington, D.C., with police chiefs and other high-ranking officials from major cities in America. I told them my story and asked what suggestions they had to rid our departments of similar acts. No one said anything. Unfortunately, silence has been the norm in most departments for too long.

If my uniform, badge and education cannot protect me from anti-black violence, what can? Now is the time to get to the heart of the matter: There must be a major effort to fundamentally restructure police departments so that they actually do what they promise: Serve and protect all people.

This should include a change at all levels. Here’s what we must do to get started:

The relationship between the community and the police is fundamentally changing. Departments should be at the forefront of a transformative model of public safety, for all possible outcomes, including defunding the police. The arrest of Derek Chauvin and three other Minneapolis police officers for the murder of George Floyd is a move in the right direction. As hundreds of thousands of people around the world demand accountability, now is the time for a meaningful change so that no one, especially black men and women, has to ever again think “that could have been me.”