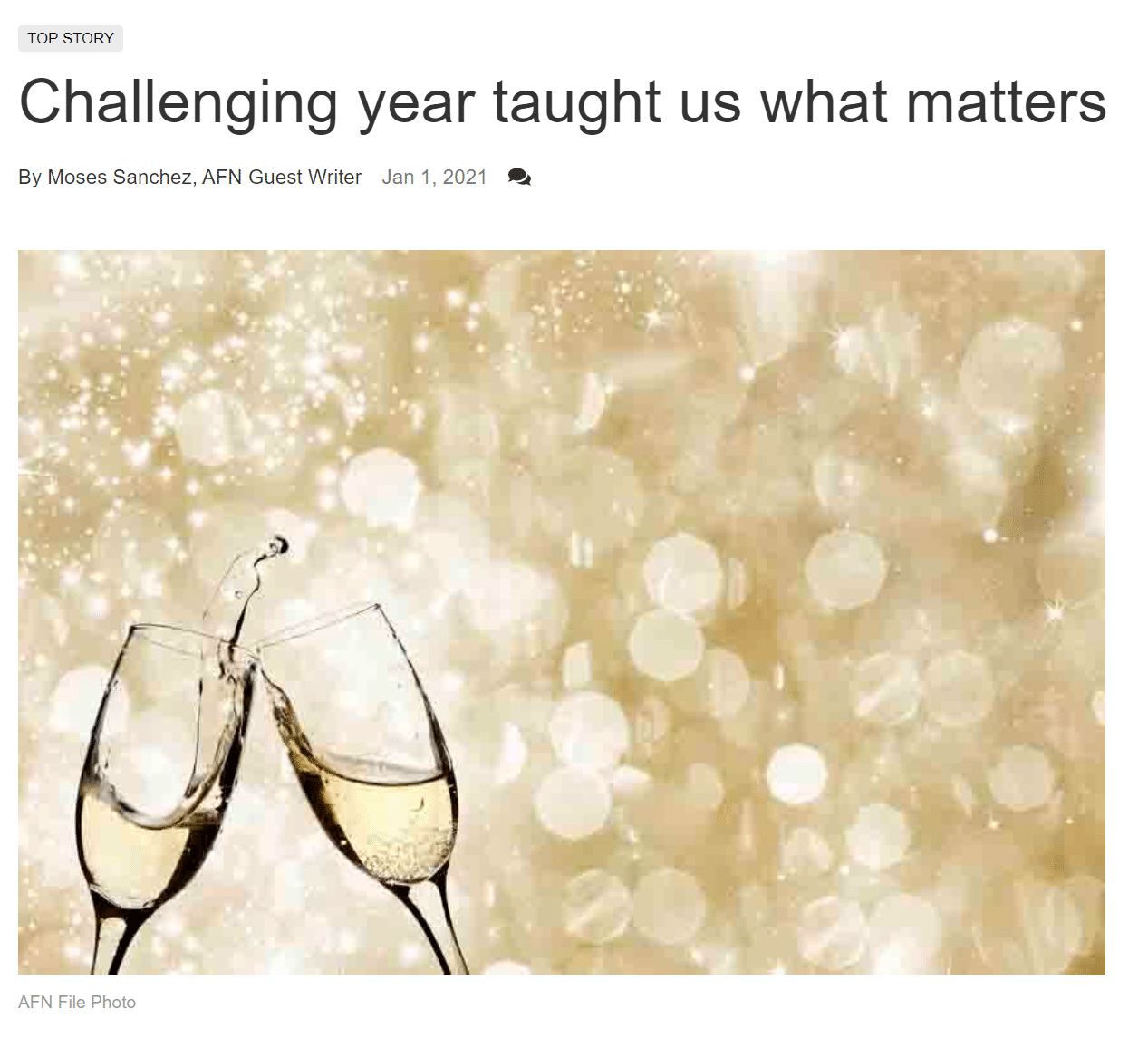 A month ago, community members and I had coffee and reflected on the year 2020. The conversation was emotional. We all had hopes and excitement as the year began and added local, state, and federal elections and 2020 would be a roller coaster ride.

News started coming in about COVID in February, and we remember there was so much unknown. I finished the Black Canyon Ultra-Marathon in mid-February and then went to an international conference in San Diego at the end of February.

That’s the first time I realized something was different. A gathering of typically 5,000 participants had about 1,800, and a presenter that sat next to me had his laptop open with the COVID tracking numbers on a global digital map.

March shutdowns began in different parts of our country. Flatten the Curve. Local restaurants and small businesses were frustrated with the rules and regulations placed on them by local, state, and guidelines coming in from federal officials.

“They keep changing and they’re inconsistent,” said one business owner.

Congress passed the Cares Act, and April came with the Paycheck Protection Program.

Locally, our lives were flipped upside down as panic set in during the course of ordinary life events. My mother-in-law passed away due to pancreatic cancer.

She passed in our home with her four kids, 10 grandchildren, their significant others and when the funeral happened, we had to pick 10 people to attend Mass at Corpus Christi. We are a traditional Hispanic family!

That’s when we joined the millions of Americans this year using live video stream for a momentous occasion.

The greatest economy on earth had shut down.

The summer of fear was here.

Furloughs and two-income households were suddenly hanging on to whatever income they had. Panic turned to fear and anxiety in our homes.

Fear quickly turned to depression and anger. A global pandemic turned political and longtime friendships and families would be tested.

COVID and the election blended together and it became “Us versus Them,” said one coffee drinker. “We can’t agree to disagree anymore” and “The year the government helped the most was also the year it hurt the most.”

By the end of the fall, families had torn apart. Decades-long relationships would break up due to opinions on COVID and politicians running for office.

Election night came and we had newly elected leaders across the Valley. Our conversation wasn’t a pro or against a political person or issue but revolved around the vitriol and breakups between family and friends during a divisive election cycle.

To many, this was the year of the “unfriend” button.

With December came some hope. Usually, a typical vaccine would take years, if not a decade, to be created.

Still, thanks to the deregulatory environment and a considerable funding push, this vaccine came about in a matter of months. Furthermore, this vaccine is anything but typical. This mRNA vaccine advances medical technology forever. My wife, a local physician, received her first shot on Christmas Eve.

After asking many locals what they learned from 2020, here’s what I came up with. I believe we learned What Matters Most.

For me, time mattered most.

The cliché of buying time really hit home. I lost loved ones this year to life and lost close friends to COVID. I wish I had more time with them. Time with family and friends mattered most to me.

As we move into 2021, there is still a lot of uncertainty in our community and our lives. Herd immunity? Our schools? Local businesses?

But if we ponder what matters most to us and focus on that, I am hopeful that 2021 will be better than 2020.