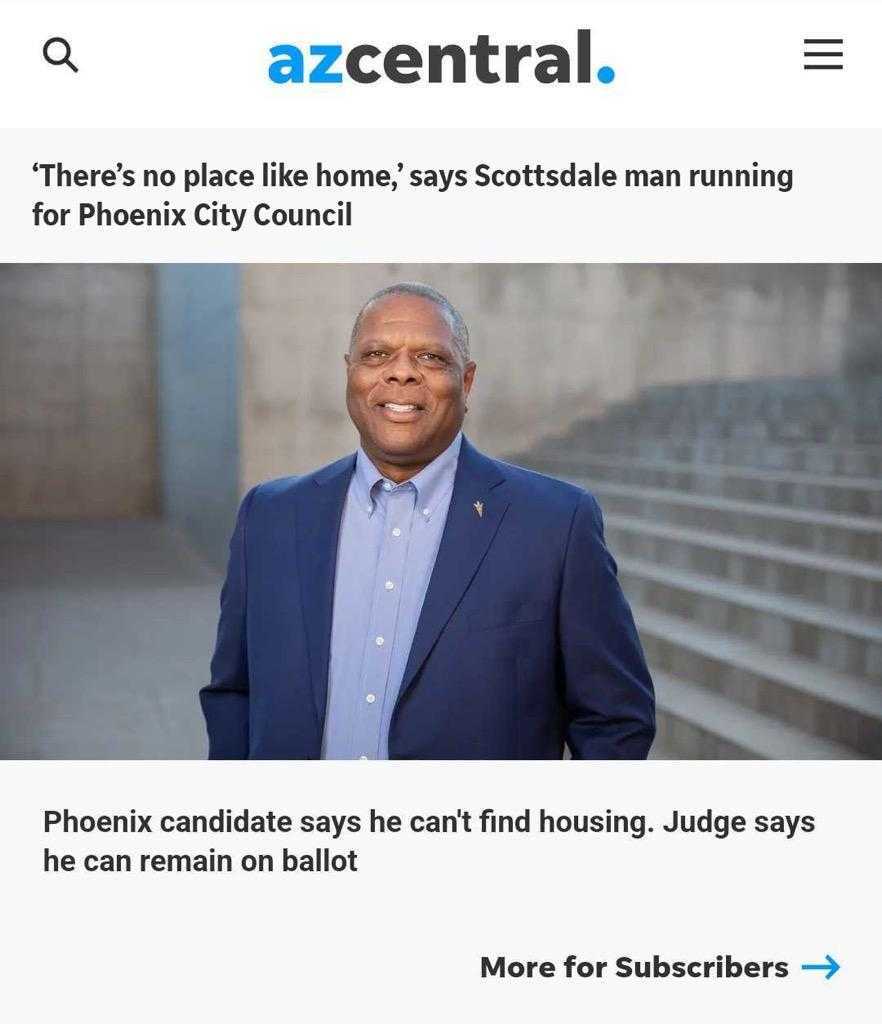 “Kevin Robinson Phoenix testified during a hearing before McCoy on Monday that he rented the Ahwatukee home around Sept. 25 because he knew he would be seeking the council post and is required to live in the district.” Ahwatukee Foothills News

“Unbeknownst to Sanchez, (Joan) Greene also became curious about Robinson’s residency claim because she, like Sanchez, has lived in Ahwatukee for more than a decade.

She began looking into property records and found Robinson’s home in Scottsdale, which he and his wife bought in 2020 – two years after they bought a home in San Francisco they still own.

“Kevin Robinson does not own a home in Phoenix,” her website states. “You will have to ask Scottsdale Kevin’s well-known political connections why they support him crossing city boundaries to run in Phoenix instead of for the Scottsdale City Council. Lax residency qualifications for candidacy is why it’s not illegal, but our community believes it is unethical.”

Greene on Monday said, “None of the 12 signatures Robinson collected himself came from Ahwatukee. …I personally (in person) collected the signatures from the people from Robinson’s shadow house neighborhood. His wife did not sign because she is registered in Scottsdale.”

He said he and his wife are looking for a new home in District 6, noting, “I had not contemplated not winning” the election.

Sanchez’s attorney, Dennis Wilenchik, argued Robinson was not a permanent Phoenix resident as required by law.

“He took the basic steps that every candidate knows to do to make it look like you’re actually residing in the district,” Wilenchik said, noting Robinson himself admitted renting the home “just to run for office” and that “we have incontrovertible evidence his family does not live there.”

“Since filing his nomination paperwork and through today, his petition states, “Defendant Robinson has not maintained his permanent residence within the City of Phoenix, much less within District 6. He has been living with his family in Scottsdale.” The petition cites ”overwhelming” evidence to show Robinson does not really live in a garden home he leased on Winston Drive in Ahwatukee.

The petition cited: video of Robinson at the Scottsdale residence; his use of a UPS Store on Ray Road in Ahwatukee as his mailing address on his nomination form; a log from his doorbell camera at the Ahwatukee home that shows “only six dates since at least June 30, 2022, on which it has detected anyone in the vicinity of his house.”

In addition, records from a “Nest” digital thermostat “shows that the temperature in the leased home is always set to 86 degrees.

“Not only is this an uncomfortable temperature for anyone to actually be living in the home during the Phoenix summer, but Nest thermostats are designed to detect when there are people present in the home,” the petition states.

“The Nest thermostat has not detected anyone in the home,” it says, adding SRP reports show “electricity usage at the home has also been minimal since January 2022.

“Finally, defendant Robinson’s lease is a one-year lease that expires on Sept. 30, 2022 – well before Election Day on Nov. 8 – which indicates no intent to remain in the home, if he were even there to begin with.”

We’ve appealed the judge’s ruling and should know something within a couple of weeks.

I’ve had a lot of people in the last week mention this story at the grocery store, and the shock is real. Some were upset, and others were quite funny.
So we went along with the AZ Central headline (first image) and added a CO-HEADLINE.
We had like 20 or 30 that we spit out quickly, but these are the ones we remembered to write down.

Which is YOUR favorite? What CO-HEADLINE could you come up with?